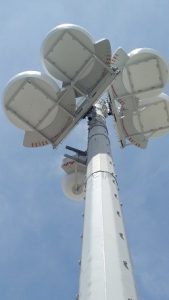 You can credit Millennials attending the music festival Coachella for some of the wireless industry’s breakthroughs in antenna technology. Every year, they stress AT&T’s (NYSE: T) network, and every year, engineers are coming up with new, innovative ways to keep those texts, tweets and posts humming along.

AT&T engineers Bob Matthews and Gary Chow have been the brains behind some unique creations that this year includes the “Drum Set Antenna.” Last year, they dreamed up the “Cheese Wheel Antenna,” and the year before that, the “Giant Eyeball Antenna.” Rather than trying to deploy lots of small antenna, the spherical design of these newer models allows the operator to cover more people in an environment like Coachella, which wrapped up over this past weekend.

Their antennas were not always spherical. They first started out doing a two-beam antenna that was able to double capacity. The next year, in 2012, they created a 5-beam antenna. By using five beams instead of two, the antenna provided roughly five times the network traffic capacity over what previously was available. They were able to divide a crowd into five slices and serve each slice with its own dedicated antenna beam.

That led to the 2013 creation of a 9-beam antenna, providing about nine times the capacity as previously; it divided the crowd into nine slices. The same year, an 18-beam antenna emerged, this time consisting of two rows with nine beams each. Then in 2014, with the “Giant Eyeball Antenna,” it was the first time AT&T used a spherical ball antenna, allowing 18 beams of radio frequencies to more precisely cover the crowd – ideal for a music festival where people are roaming about the grounds.

Each time they improved the antenna, they would see the crowd’s behavior change. Two years ago, the total mobile data traffic at the music festival was 6.5 terabytes; in 2015, that about doubled to 12.2 TB. “Every year they break it. We make it better, they break it,” Matthews quipped. It’s not an “if you build it they will come” kind of situation. It’s “if you build it, they flood it.”

Chow said it was really around the 2008 timeframe when the popularity of the iPhone started driving traffic through the roof. “We were kind of forced to innovate,” he said, coming out with higher capacity antennas every year. “Basically, it was out of necessity that we constantly tried to improve our antenna design. That’s why we ended up where we are today. Mainly because of trying to keep up with the data demand every year at this music festival,” where a lot of social media is getting used.

At this year’s festival, AT&T used the Drum Set Antenna along with four cell on wheels (COWS) deployed with each one supporting its own specialty high-capacity antenna. With these antennas and 59 total beams covering the event, more than 18.6 TB of data crossed AT&T’s mobile network at the festival over the first three days. That’s more than 50 percent more data usage compared to the first weekend last year.

In total, 29.2 TB of mobile data was consumed by AT&T customers at Coachella over the two weekends of the festival. According to AT&T, that’s a new data record not only for Coachella, but for any music festival so far. That 29.2 TB is equal to 83.5 million social media posts with photos.

After debuting at the Coachella music festival, the antenna design has been replicated by others. AT&T is not naming any hardware vendors for the antennas. The antenna was originally designed for outdoor use but it also can be repurposed for a stadium, speedway, concert hall or other environment. Initially, the solution was high-band only and later iterations included both high and low bands: 700, 850, 1900 and AWS, which is 1700 on the uplink and 2100 on the downlink.

What about next year? “We have an idea of a design,” Chow said. “We’re currently looking at it right now.” Stay tuned.