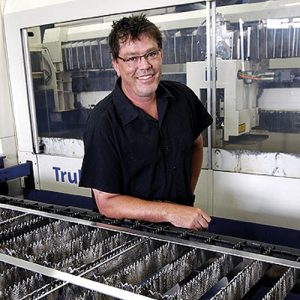 Manufacturing in New Zealand is hard enough as it is, but Lower Hutt firm Metco Engineering manages to do it better than China.

One of its larger customers is Swedish lock manufacturer giant Assa Abloy, for which it makes stainless steel window stays.

Director Paul Jessup said about two years ago Assa Abloy had signalled it would have to move the window stay manufacturing to its operations in China.

“We put up our hand and said let us do a cost comparison against China. We were pricing against their own factory. We ended up sourcing our stainless steel out of Taiwan and buying our material at the same cost as the Chinese, so we were able to compete.

“We’ve also got low overheads, we don’t have a lot of admin staff, which is key.”

A shelf in the company’s Taita factory is home to an assortment of metal objects produced by Metco staff and its machines, including metal enclosures for LCD screens in military vehicles, gun silencers, and guttering parts.

The company does one-off jobs or product runs up to 10,000, depending on what the customer needs, and considers itself a broad-based manufacturer, offering design services right through to production and light assembly.

“We’re constantly developing our customers’ products and trying to improve the efficiency and quality of materials to keep the costs of their products down so they can be competitive.

“If they’re competitive that keeps us in business as well as them. That’s key to manufacturing in New Zealand, having good partnerships between suppliers and customers.”

The company is growing each year, Jessup says, and is negotiating at present to buy another local firm with 30 staff.